Ice Pigging™ is a highly effective, fast and exceptionally low-risk method of removing sediment, biofilm and other contaminants or objects from pressurised water pipes.

Ice Pigging™ on water mains has been widely adopted as the most cost-effective and lowest risk method of pipe cleaning in the UK and in many countries around the world.

Ice Pigging™ is proven to effectively remove both sediment and biofilm without causing damage to the pipe wall. Over time, iron and manganese sediments can accumulate in the network due to ineffective water treatment, or as a result of deterioration of the pipework itself. These fine sediments can significantly affect the appearance of drinking water and even small quantities can result in large discolouration events when changes to the operation of the network occur.

Cleaning pipes with Ice Pigging™ can have a dramatic effect on improving water quality, but also enables greater network flexibility by providing a clean network on which flow reversals and other activities can take place, with lower risk of causing discolouration.

The semi-solid ice slurry can be applied uniquely because it is pumpable like a liquid, yet also behaves as a solid when a ‘pig’ of ice slurry is formed within a pipe.

Ice Pigging™ can be used to clean pipelines ranging from 60-700mm in diameter without excavation. It is fast, effective and exceptionally low risk, using significantly less water than most comparable techniques.

What is Ice Pigging™ 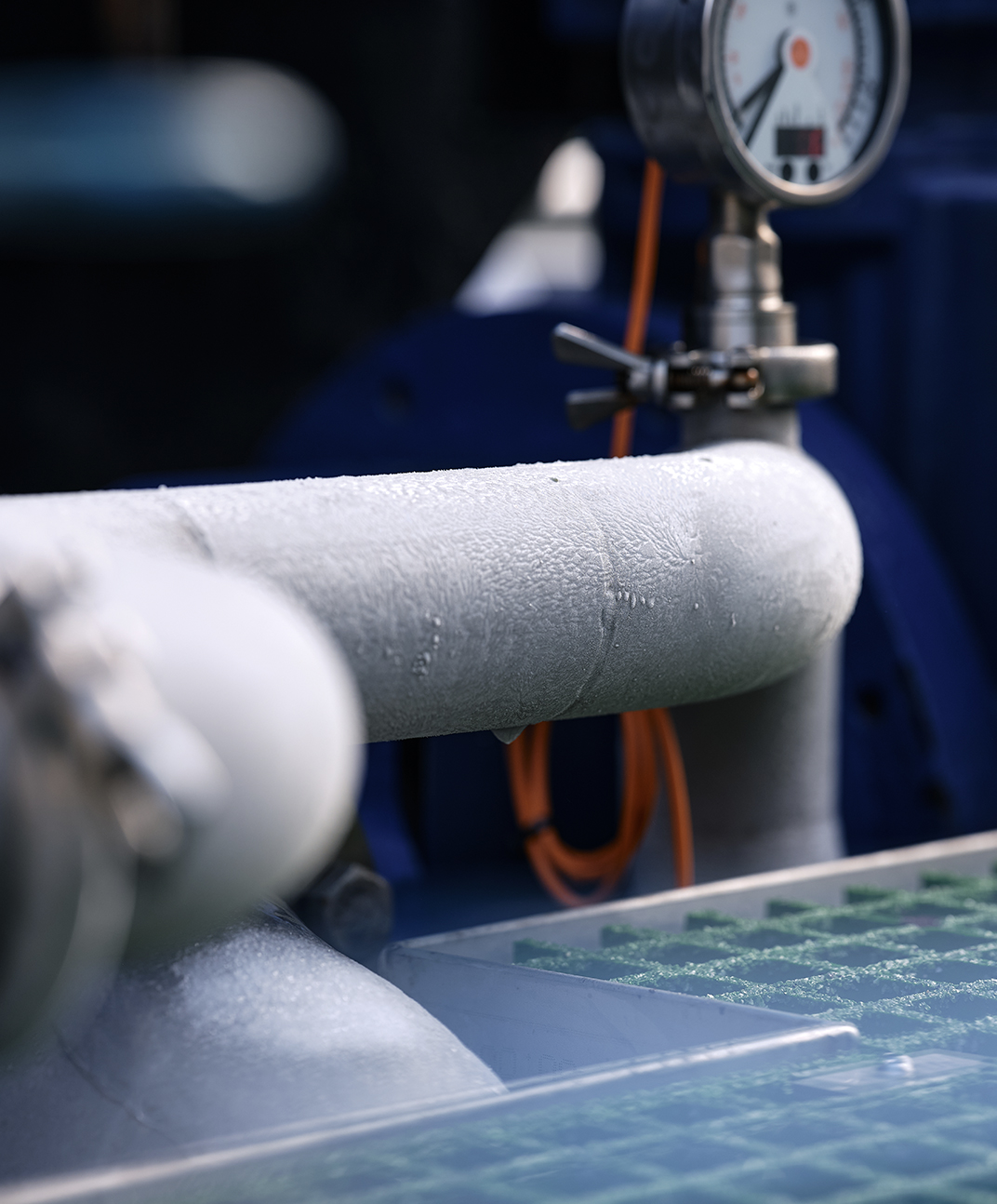 Isolate the main The main is isolated by closing valves upstream and downstream of the section to be cleaned.

Insert the ice The ice slurry is pumped into the pipe via a fire hydrant or similar fitting. A ‘pig’ of ice is formed, with the displaced water discharged at the outlet fitting.

Open upstream valve The ice is pushed along the pipe using the natural pressure in the network. To do this, the upstream valve is opened and flow at the outlet hydrant is used to control the speed of the ice. As the ice flows through the pipe it passes over every surface and collects sediment or wipes biofilm as it passes.

Collect Ice Pig™ Water in front of the pig is discharged normally. Temperature at the outlet point warns of the arrival of the ice, which allows the sediment laden ice to be collected separately in a tanker if desired.

Flush and return to service The pipe is then flushed to the appropriate standard and promptly returned to service. The process is efficient, rapid and exceptionally low risk.

All operations are carefully monitored in real-time by our specialist engineers using our Flow Analysis System.

Time: Several kilometres of trunk main can be cleaned in 2-3 hours, distribution pipes take only minutes - Minimum disruption to supply.

Ease: Ice is inserted and ejected using existing hydrants, no network modifications are required. Pig flows through all pipe diameters, fittings, and topographies.

Low risk: Exceptionally low risk – if ever the ice gets stuck, it will simply melt.

Effectiveness: A physical clean is undertaken rather than just a flush. Quantifiable results show the amount of sediment removed from the network.

Environmental Benefits: The Ice is harmless to public health - no harmful chemicals are required.

Example of Ice Pigging™ in operation 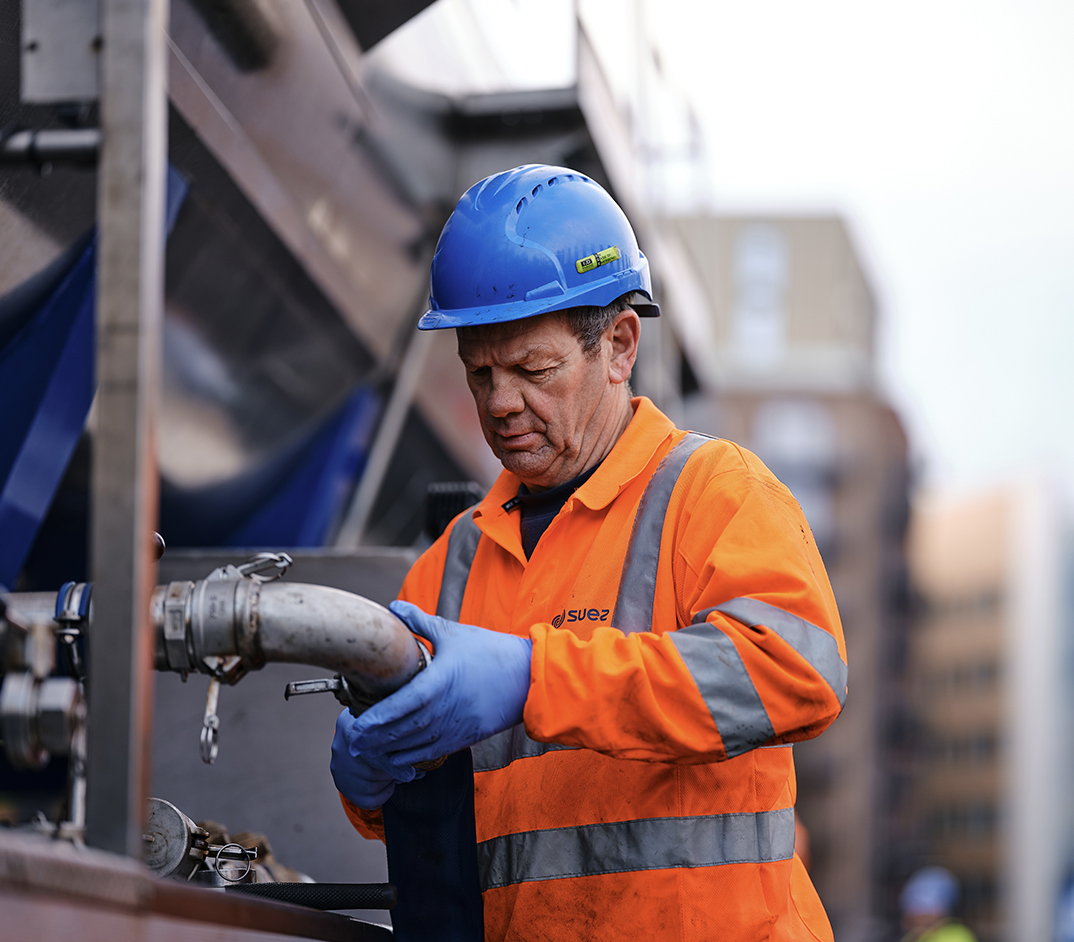 “The pipe was cleaned over two nights with the main isolated for only 6 hours in total, resulting in no customer disruption and over 323kg of material removed from the two sections. Ice Pigging™ has allowed the company to reverse flows in a pipe which previously, would have been impossible at such short notice.” Welsh Water

The Issue: A reservoir was being taken out of service and in order to maintain supply to thousands of customers, the flow needed to be reversed on a trunk main. Flow reversals represent a significant change to the balance of a network and any sediment present can easily be suspended, resulting in a major discolouration event. The client decided to clean the pipe prior to undertaking the flow reversal.

The Solution: SUEZ cleaned 2.5km of DN400 cement lined ductile iron pipe. The Ice Pigging™ took place over two nights, with the main isolated for just three hours each night. There were minimal enabling works required and no excavations. Post cleaning disinfection wasn’t required and the mains were directly returned to service with zero disruption to supply.

The Ice Pigging™ team have 90 years of experience developing and delivering this award winning, patented technology across a variety of sectors worldwide. If you want to know how Ice Pigging™ can solve issues with your pipework systems and processes, save you money and make your cleaning processes more efficient, get in touch.